Three applicants for the Presbyterian Kirk in the Pines Maack-Ormsbee Scholarship will each receive a $2,600 grant for the 2021-22 school year. The winners are Owen Steenkamp, grandson of Barbara and Tony Booth, Ella Fuquay, granddaughter of Barbara and Walter Fuquay, and Nathan Kennedy, grandson of Helen Van Stone.

Read more about the winners in the September 2021 Voice in the Pines newsletter at kirkinthepines.org.

Repair and renovation to Kirk offices complete after 5 months

The flooding of the Kirk offices following a pipe rupture this winter led to a five-month process of repair and renovation.  Leaders had the opportunity to update the 30-year-old facility in the process.  Updated and more serviceable flooring and wall coverings were among the improvements.

Read more about the flood damage and renovation of the offices and choir room in the March and August 2021 Voice in the Pines newsletter at kirkinthepines.org.

Partners Against Trafficking Humans (PATH) made an “eye-opening” presentation on June 9, 2021, at the Presbyterian Kirk in the Pines.  Hayley Ross, Community Education Coordinator for PATH led an information packed educational session in Hoffius Hall on June 9, 2021.  Human trafficking is surprisingly widespread in Arkansas and PATH provides a way back for victims.

Read more about the PATH organization and how you can help in the July 2021 Voice in the Pines newsletter at kirkinthepines.org.

Vicki Rosenquist is Kirk PW Woman of Faith for 2021

Vicki Rosenquist was chosen as this year’s PW Woman of Faith.  She is an active member of the Kirk and is currently moderator of the Presbyterian Women.  This honor is awarded annually to a woman who is active in both the life of the church and in PW.

Read more about Vicki in the June Voice in the Pines newsletter at kirkinthepines.org

Generosity shown in response to Peanut Butter and Jelly Drive

The Kirk’s Mission Committee sponsored a Peanut Butter and Jelly aka “PB&J” drive in May to help feed children and families in our area.  Kirk members donated 322 jars of peanut butter and 363 jars of jelly, which were donated to local food bank agencies supported by the Kirk.

Read more about the PB&J drive in the May and June 2021 Voice in the Pines newsletter at kirkinthepines.org.

Holy Week 2021 saw the return of in-person services at the Kirk in the Pines for the first time after a two-year hiatus due to COVID. Pastor Bill Bailey led the somber Maundy Thursday service, a Tenebrae service, by reading scriptures from the Gospel of Mark recounting the story of the Passion of Jesus. The sacrament of Communion was celebrated.  The readings were punctuated by hymns and extinguishing each of seven candles in sequence.

Read more about the celebrations of Holy Week in the May 2021 Voice in the Pines newsletter at kirkinthepines.org.

COVID Impacts the Presbyterian Kirk in the Pines

We have passed the first anniversary of living with the COVID pandemic in the United States. Our membership has fared better than the rest of the population in Saline and Garland counties where most of our members live. Approximately five percent of our congregation has had COVID. The Kirk has experienced no fatalities.

For more information see the 2021 April Voice in the Pines newsletter at kirkinthepines.org. 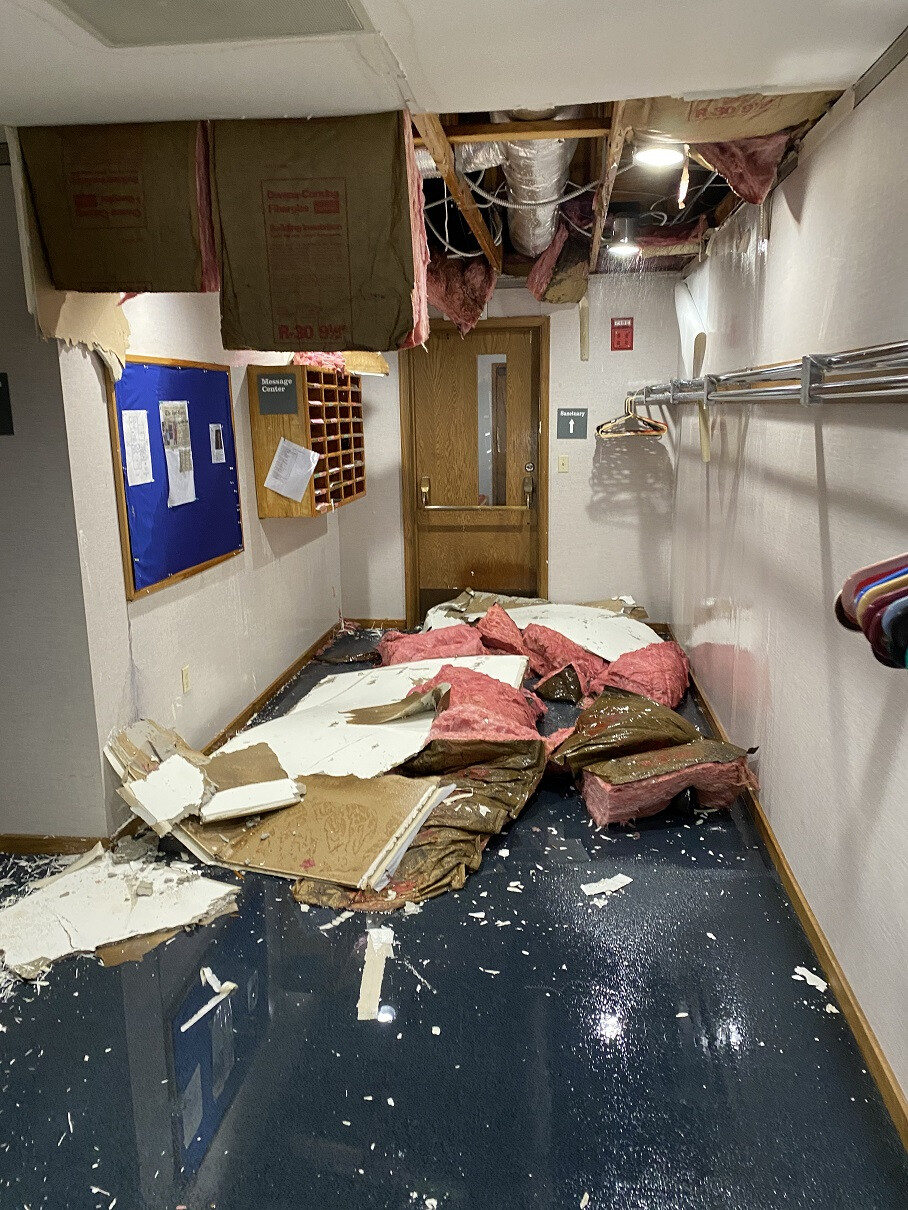 The hard winter freeze in late February led to a pipe rupture and serious flooding damage to the Kirk office building. The walls and floors in the office were flooded and equipment in the copy/mail room was wet including the internet router and wireless. The sanctuary, Hoffius Hall, Kirk library, kitchen, choir room, office conference room, and restrooms in the office building were unaffected.

Read more about the damage and the beginnings of remediation efforts in the March 2021 Voice in the Pines newsletter at kirkinthepines.org. 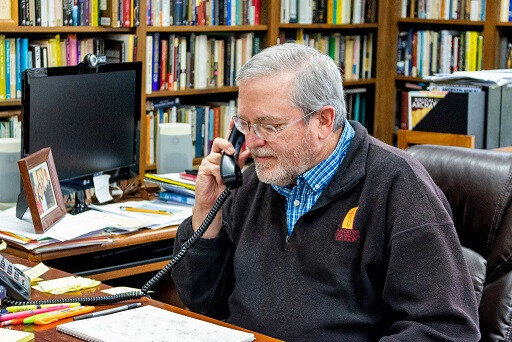 Our pastor, Bill Bailey, has continued to serve the congregation though the COVID pandemic. In the February 2021 Voice in the Pines, he describes the impact of COVID on his ministry at the Kirk.  No longer being able to visit parishioners he was forced to rely on phone calls and email to communicate. Worship transitioned to pre-recorded services posted on the Kirk website.  Presbytery obligations were met by participating in Zoom meetings.

Read more about how COVID has impacted Reverend Bailey’s ministry in the February 2021 Voice in the Pines at kirkinthepines.org. 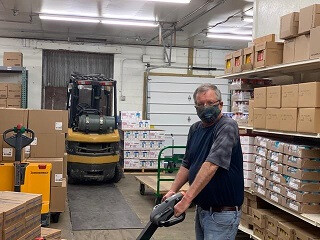 The 2020 Kirk’s Mission Committee’s  Second Mile Campaign launched early in the year saw an overwhelmingly generous response from the Kirk congregation.  Nearly $50,000 was raised in only 9 months.  Five local agencies serving the hungry in our area were recipients of the funds including Jackson House, Cooperative Christian Ministry and Clinic, Potter’s Clay, Arkansas Food Bank, and Project Hope Food Bank

Learn more about the staggering response to the Second Mile Campaign in the January 2021 Voice in the Pines newsletter at kirkinthepines.org.

Over the years the Kirk in the Pines Presbyterian Church has had quite a few special events. Here are some of the highlights!

Advent is a time for reflection on the gift of God in Christ.  Click on the three online resources below for your advent scripture reading, contemplation, and prayer.

This series of daily advent devotionals from November 29 -December 25 are short reflections on scripture and on the Paul Gerhardt hymn text “O Lord How Shall I Meet You” followed by a prayer. The reflections probe the nature of the incarnation coming as it does at this season and daily in the life of believers.

We featured the D365 daily readings in a previous newsletter.  These reflections, posted by the PC(USA) continue through the advent season and encourage us to pause, listen (scripture), think (devotional reflections), pray, and go forward as we encounter Christ’s advent in the world.

This year’s advent devotionals from the Austin Presbyterian Theological Seminary are a truly unique gift.  “Singing Our Advent Joy” provides devotional reflections on scripture and hymns and carols from “hymnals used for worship in Shelton Chapel at Austin Seminary: Glory to God, The United Methodist Hymnal, African-American Heritage Hymnal, and Santo Santo Santo.” The texts of these familiar and unfamiliar songs are curated and presented by Eric Wall, assistant professor of sacred music at the seminary.  The contributors encourage us to “sing together with great joy, even as we are apart!” 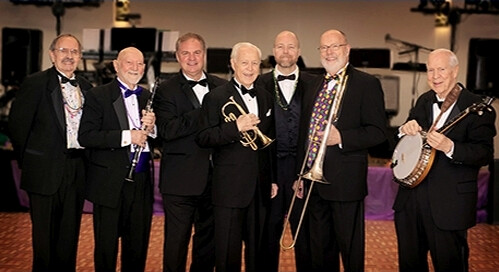 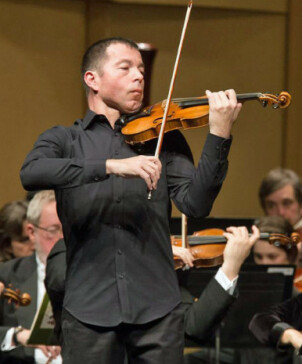 Arkansas Symphony Orchestra violinist and concertmaster Kiril Laskarov, concertmaster of the Arkansas Symphony for the last 21 seasons) performed Jan. 12, in the Kirk sanctuary. With Jason
Pennington-Saugey at the piano, Laskarov performed the Edward Elgar Sonata for Violin and Piano Op. 82. The concert was followed by a reception in Hoffius
Hall. 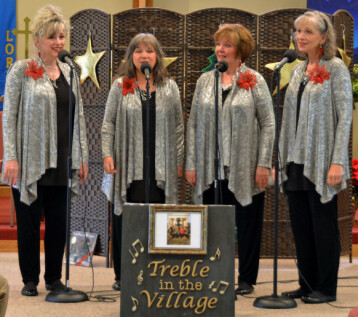 Treble in the Village
presented their special seasonalmusic Dec. 11 in Hoffius Hall. This melodious quartet of Kathy Allison, Patty Van Cleave, Sharon Gardner and Kristi Ponder involved us all in a traditional Christmas Carol sing-along.

The Kirk choir presented "Our Christmas Carols from Around the World," a Sunday afternoon choral concert Dec. 8 in the sanctuary.
Music Director Randy Toney said: “This Christmas program not only includes well-known carols originating from France, England, Germany, Ireland and the Soviet Ukraine, but will also feature four-hand piano artistry by Donna Toney and Fran Stroud."

The Kirk's Thanksgiving Dinner with all the trimmings was catered this year by Daily Dish Thursday, November 28 in Hoffius Hall. 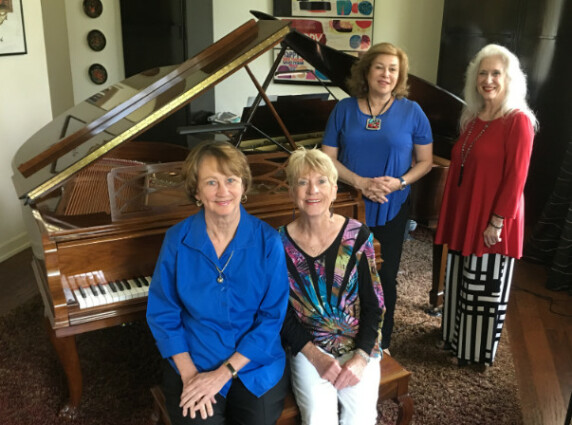 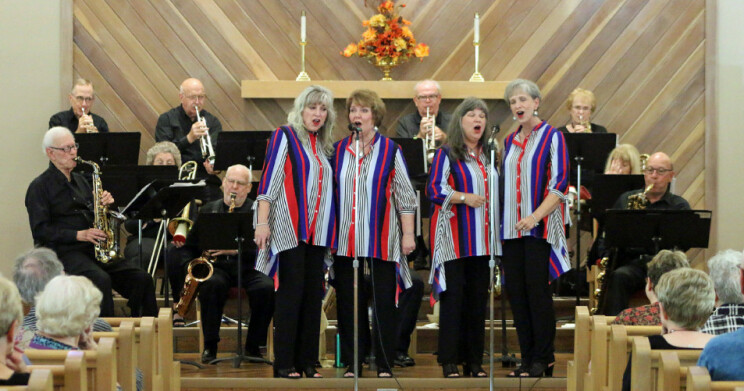 More than 130 music lovers who gathered in the Presbyterian Kirk in the Pines sanctuary on Sunday
afternoon, Sept. 29.

A Potluck Supper with Speaker 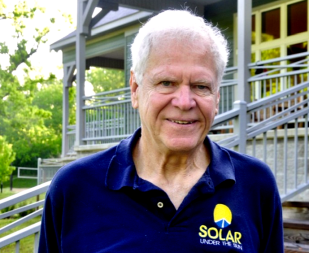 Chris McRae was held July 24 in Hoffius Hall. Chris McRae is a member of Central Presbyterian Church of Fort Smith, Arkansas. Chris is considered to be the founder of Solar Under The Sun, given that it was his vision to bring solar power to those areas and individuals suffering from energy poverty!

The University of the Ozarks Chamber Singers kicked off their 2019 concert tour with a May 19  concert at Kirk in the Pines Presbyterian Church! 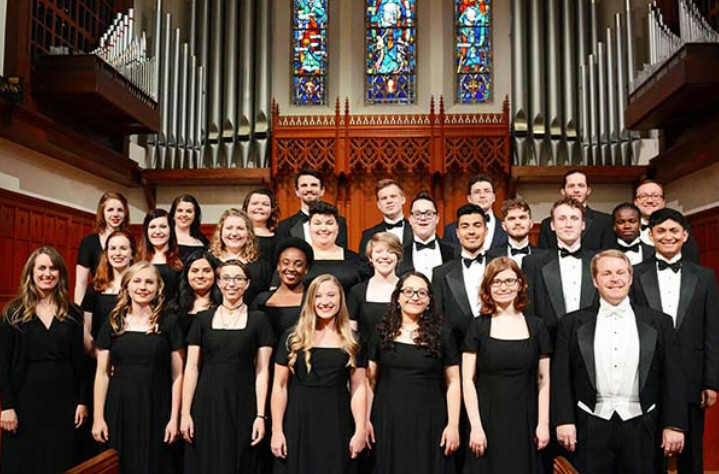 The annual Kirk picnic was held May 16, at the Balboa Pavilion. The theme this year was “Hometown Picnic.” Grillers Jerral Johnson and Jim Reimers, among others, began cooking hamburgers, hot dogs and bratwursts. The Greenhorns began a day or two earlier to prepare all “fixin’s” like cole slaw, potato
salad, baked beans, tomatoes, buns and cookies for the 125 who attended. 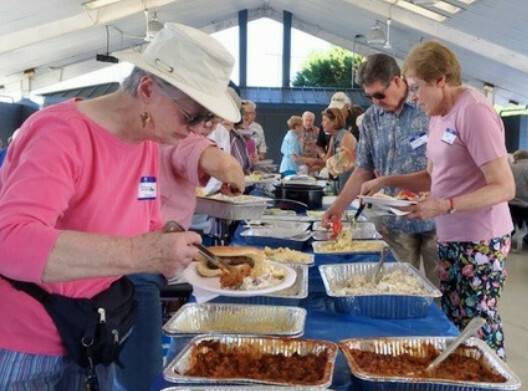 Guests put on their Mardi Gras beads and enjoyed a toe-tapping good time as the Stompers played!

Top of the Rock Entertained

Treble in the Village Entertained

Treble in the Village entertained  December 6 in Hoffius Hall. Hors d'oeuvres were shared. 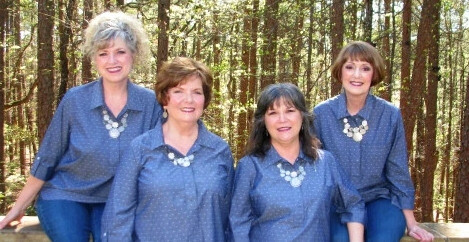 Kirk in the Pines celebrated its Scottish heritage at the Kirkin’ o’ the Tartans on Sept. 16. The Lyon College Pipe Band from Lyon College in Batesville performed at the Kirk playing Scotland the Brave, among other marches, and accompanied the choir in the anthem Amazing Grace. Jimmy Bell (photo) has lead the ceremony for fifteen years. 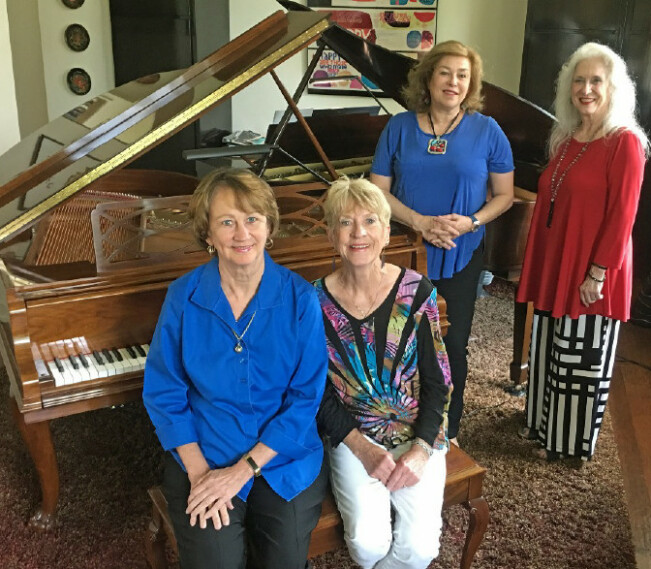 Four Pianists and organists, Ruth Clemens, Martha Smither, Fran Stroud, and Donna Toney, played a variety of music August 12 in the Kirk Sanctuary! They call themselves the Cuatro Claviers. It was so popular extra folding chairs had to be put in the isles!

A photo travelog of France and Switzerland tour

The travelog of slides was narrated by Tom Hayek in Hoffius Hall Wednesday, August 15, after a Pot Luck Dinner attended by over 100 people. The Kirk Choir with Music Director Randy Toney, gathered June 24 in Hoffius Hall to host a farewell reception for long-time friend and associate, Pat Hightower, who is moving away. There was a great turnout to celebrate her. 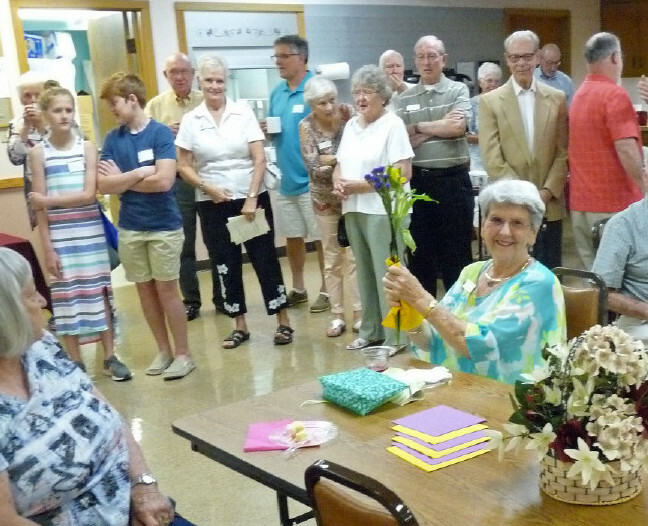 The Annual Kirk Picnic was held on July 6 at the Balboa Pavilion.

The Kirk members enjoyed barbecue and baseball at the annual Summer Picnic at the Balboa Pavilion. The Lumos Wind Quintet from England played in the Kirk sanctuary as part of the Hot Springs Music Festival. A reception followed in Hoffius Hall.
The Quintet was formed in 2014. The group played a variety of musical styles with arrangements that allow each player to be featured as a soloist.

The University of the Ozarks Choir

The University of the Ozarks Choir joined us in worship services April 7 & 8. True to their Christian heritage, they prepare students from diverse religious, cultural, educational and economic backgrounds to live life fully. The Village Big Band entertained the 140 people who attended the All Kirk Dinner, January 29, at the Coronado Center. 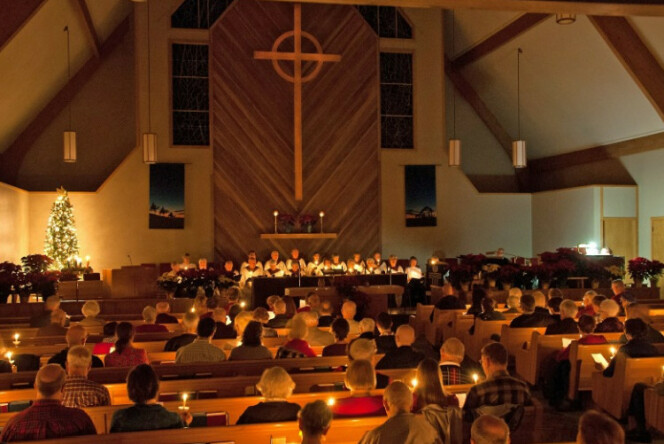 Sunday, December 24, we held our traditional Christmas Eve Candlelight Service. The evening included readings from the Old Testament and New Testament, Christmas carols, the Kirk Choir, a mixed quartet, and more. The service concluded with a candle flame passed throughout the church.

Everyone was in a festive mood and enjoyed the fun and games at the second annual Kirk Christmas Gathering.

December 13, over 80 Kirk members laid out a literal smorgasbord of salads, entrées, vegetables, side dishes and finger foods, desserts, punch, and other drinks. 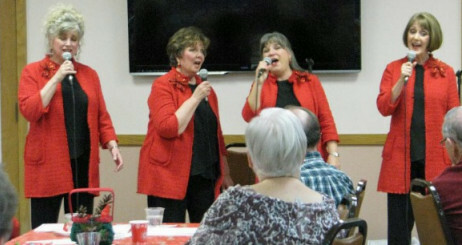 The ladies’ quartet Treble In the Village provided musical entertainment for the evening. Voices Rising presented a summer concert Sunday, June 25. This select group of vocalists, under the direction of Fran Stroud, presented music ranging from Broadway to sacred to patriotic.

Two delightful characters, "Mabel" and "Melvis," brought their "daily radio show" to Presbyterian Kirk in the Pines from "Lazy Oaks, Arkansas" in May, 2017.

"Laugh Lines," was an original comedy, written and produced by Bev Bullard and Judy Corwin to benefit Safe Haven Shelter in Hot Springs. The comedy lived up to its name.

After the show, Melvis and Mabel greeted their many fans in the Narthex. The evening's Free Will Offering yielded $655 to benefit homeless women and children in Safe Haven Shelter!

Want to see more activities, photos, and even videos?

Help spread the word about the Kirk in the Pines with your friends!